I am a startup guy and software engineer. Currently I am taking some time off to work on personal and open source projects. Previously, I was founding engineer at HubSpot. I joined as the first full-time software engineer and spent seven and a half years building out a powerful suite of marketing tools. By the time I left, we had 10,000+ paying customers and were filing our S1 to go public as a billion dollar company.

Stallion is a new open-source content management system designed from the ground up for performance, stability, and customization. Use it to run anything from a simple blog to a corporate web site to a custom web application. Check out the web site or view the code on GitHub. 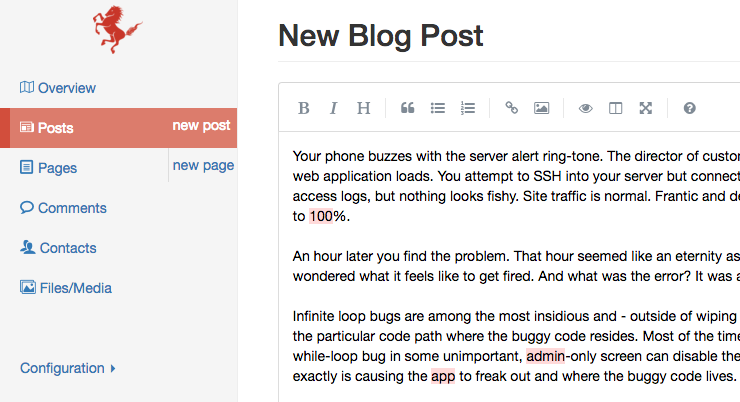 With a partner, I built a product to improve relations between managers and employees. Grokky helped managers run better 1:1’s by keeping track of notes and tasks, prompting people for agendas, and sending pre-meeting emails to remind people of meeting context.

The backend was written in Python/Flask, and the front-end was in Angular.

Here is a video demonstration of the product:

I was the tech lead for the team building the next generation of the HubSpot content tools. We have built tools for creating blog posts, landing pages, emails, and full web sites. Features include visual template building, a powerful templating language, WYSIWYG editing, A/B testing, and integration with the contacts system and analytics.

My personal responsibilities included: designing and/or reviewing overall architectual decisions, mentoring and doing code reviews for a team of 12 people, writing tens of thousands lines of code, working with the product manager to find the proper technical solution to business problems, attending usability sessions and proposing UI design changes, performing devops tasks to ensure we could have less than an hour of total downtime on our public facing pages over the course of a year.

The system was built in python running on django. The backend was implemented mostly as REST-ful API's, while the frontend used backbone and custom javascript. I co-lead a team that built an analytics system that would allow our customers to discover where visitors so their site originated from and how they converted into customers and leads, in a set of easy to use charts and tables.

The project used python and java for the programming, and the log processing jobs ran on Hadoop.

In addition to the major projects listed here, during my seven years at HubSpot I have engaged in numerous smaller projects:

When I joined HubSpot I took over the early prototype of the HubSpot content tools, which was a custom DotNetNuke installation running in VB on the ASP.NET stack. I converted it to C# and rebuilt the UI to make it something easy for marketers to use with a drop drop controls. I also built out features such as analytics dashboards, a drag and drop form builder, an inline content editor, and a browser based template editor. My senior year at a college I founded a company to build a way for non-technical users to build and host an online database. I took the project from initial idea to the point where I was making money advertising via Google Adwords and selling subscriptions to the product. The company was "acquihired" by HubSpot. During college I developed an application to share music and videos with other people in the dormitory.